Having a child with Epilepsy is never easy.  Having two is extremely challenging.  Doctor’s appointments never seem to end.  Day to day, the challenges go from easy to challenging overnight and sometimes in less time than that.  You can never plan a day, or a week, or anything really.  You simply live life day to day as it comes.

As a parent with Epilepsy, raising children with Epilepsy I have an advantage in that I am able to better understand the ups and downs of our days and nights.  I am constantly watching and gauging whether something could be related to a medication or a seizure, or is only related to my children’s age and stage of life. Every day I deduct the differences in our lives and our challenges.  What may be normal for a four year old could be a “sign” of stress for my four year old.  What comes out as attitude in both my girls, can be the brains reaction to being overwhelmed and stressed for my daughters.

For 32 years I have personally lived with Epilepsy – 33 years this June.  For 9 years, I have watched and loved on my daughters as they have gone through also living with this disorder.  We have had multiple testing from EEG’s to CT Scans to MRI’s to find what dysfunction has been going on with our brains – yes that is testing times 3 for me and my girls.

We have deducted without testing that obviously for us, this disorder is genetic and that also means there will likely be no cure for us.  My children are the fifth generation living with Epilepsy that we know of as before my grandfather and great grandfather, Epilepsy was treated as a form of psychotic illness and not a treatable disorder often leading to living life in an asylum or with Epilepsy being hidden as much as possible in a family.  Because of this we are unsure how far back this disorder truly goes for our own family.

My daughters are the first generation since my grandfather and his two sisters who have had multiple siblings carrying the same genetic trait leading to seizures.  We currently await the birth of our son to see if he is also a carrier which we will not know until he is at least a few months old if he follows the patterns of his older sisters.  Yes, I will be on pins and needles as I wait to see.

Last week, my baby girl was scheduled for an Video EEG for 3-5 days at MUSC Children’s Hospital in Charleston under the direction of our wonderful doctors from MUSC’s Pediatric Neurology department – the same department that treated my oldest daughter and myself for this disorder.  Though I personally dreaded being 5 months pregnant in a hospital room with an extremely active and impatient four year old, I have to say that it all went very well. 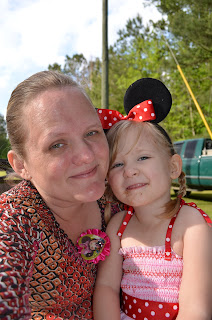 We arrived at MUSC around 12:30pm taking our time to get there so Laycie wasn’t rushed getting up that morning, giving her a bath, stopping by the store on the way to get snacks for our stay because at 5 months pregnant Mommy stays pretty hungry now.

We were immediately admitted and taken to our room where Laycie’s blood pressure was taken, her height was measured, temp and all the good stuff was done.  Then we waited… and we waited… and finally in came a member of the pediatric team to check up on her.  It was 2:30 and she was getting hungry so my first question was “can she eat?”.  He said that he had no problem with that and to order her lunch which I did as soon as he left – mac n cheese, yogurt and fruit salad which she only ate the strawberries out of.  Then we waited again.

Finally around 5pm her neurologist, Dr. Turner stopped by to check on her.  He asked how long we had been there and had we seen anyone from their team, which we had not but MUSC is an extremely busy place.  He listened to our history, checked out Laycie and went off to issue the orders for our EEG.  Within an hour our wonderful EEG tech arrived and began gluing Laycie’s wires on.

Anyone who has had an EEG or a child who has had one knows this procedure is simple but strange for a child to experience.  The EEG tech must measure the child’s head and place lines where the wires need to go, marking with a special red pencil as they go.  They then must go back to specify points with x’s made by the red pen showing where to attach the wires.  Then they are ready to start applying a special scrub that allows the wires to stick and scoop the special goop onto the wires to help the wires work.  The next step is sticking the sticky goop covered wires onto the scalp of the patient in the right places, as every wire has a specific area is needs to be attached to show the correct results in the test.  Since the wires needed to be on for a long time for Laycie’s test they had to be glued into place using small gauze pieces dipped in EEG glue and then quick set using cold air.  This whole procedure took about an hour to an hour and a half for our sweet girl.  And I must say she did amazing awesome for a four year old!

After the EEG wires were places, the tech covered them with a zipper cover and plugged them up to the appropriate places in her wire box.  Then she connected the computer and turned on Laycie’s video cameras which were needed to watch her as her test was running to see if there were any signs of seizure and specify what reactions she had along with different spikes throughout the procedure.  The tech also placed a cute pink cap over Laycie’s head to keep her from removing the wires before leaving us to rest for the night.

And then we were left alone with an active four year old who wanted the little wires off her head, the hospital “bracelet” off her arm and simply to go home already to sleep in her own bed.  She insisted I snuggle up with her to sleep which I did until midnight.  We also watched the new Chipmunks movie before bed to help keep her occupied and snuggled her two favorite puppies and her baby doll in the bed to help her stay relaxed.  Around 9:30pm she was ready to snooze the night away and I was very thankful!

The most aggravating part of the process for us that night was getting comfortable, keeping the hat and gauze over her wires on her head and keeping the wires from falling off the bed while she was sleeping.  At some point in the night we had to add a seizure pad on the side to keep our sweet girl from rolling off the hospital bed while asleep during her test.

The next morning came quickly with a 7:30am visit from Dr. Turner stating that we would be able to go home in a couple of hours.  I was completely surprised since we expected to be there for days that week testing.  In less than 24 hours, Dr. Turner was able to provide us with a specific Epilepsy type for Laycie, along with a suggestion that the type of Epilepsy could also fit Emmalee’s and my Epilepsy type as genetically inherited.

Finally after 32 years, we have a specific diagnoses of Rolandic Epilepsy with BCECTS type seizures.  After doing days of research on this form of Epilepsy, I agree it fits us well and has opened up a world of questions as well as specific answers at the same time.  Our normal EEG’s do not show Epileptic activity at all but both Laycie and my overnight tests show temporal spikes followed by a severely slow period followed by an extremely fast period of activity in the brain.  This also explains why my girls and I are not morning people, as our brains do not rest well at night. 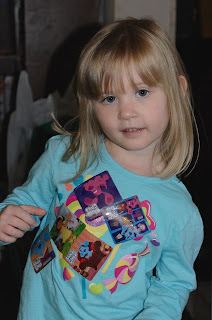 We are currently setting Emmalee up for testing to see if she has indeed outgrown her Epilepsy or if she is having night time spikes that are affecting her rest and sleep.  We are also setting up genetic testing to pinpoint where this disorder is traveling in our chromosomes for future reference as well as in preparation for our new sweet boy.  It will be nice to have answers to both of these questions.

We are now home and had our hospital follow up for Laycie today where our pediatrician is supporting my request for further testing.  Laycie is doing great.  We have lowered her daytime medication leaving her nighttime meds the same so that they control the visible spikes she is having each night.  She is a bit tired still from the changes but overall she’s doing much better with the lower daily dosage.

Every day is a challenge but at this point we are very excited at Luv’N Lambert Life!